Heavy rain yesterday dampened anticipated dust on the four morning stages of Heat 1, in the forests East of Canberra.

In the second round of the series, the conditions prompted organizers to chop 12 kilometres off the second stage, which had been planned as the day’s equal longest.

The shortened SS2 saw the Subaru do duo elevated to second overall, just 14.1 seconds behind the Toyota Yaris of Championship leader Harry Bates.

An even more impressive run on SS3 left Taylor and Read just 0.3 of a second off Bates on the stage.

The pair really hit the sweet spot on SS4, the final of Heat 1, grabbing first on stage.

They went into the day’s only service with a deficit of just 12.1 seconds to Harry Bates, whose younger sibling, Lewis, was ruled our of contention with a roll-over on SS4.

Heat 2 was a repeat of the four morning stages and a 10-second improvement over their morning run on SS5 evidenced Subaru do’s confidence.

Second place on SS6 – again reduced in distance by 12 km – maintained consistency and overall second on Heat 2 and that is how the story remained over the remaining two stages, concluding with a gap of just 29.2 seconds to heat and overall rally winner Harry Bates.

Molly said: “The rain yesterday probably did us all a favour by settling the dust across the first four stages.

“The one-day format certainly leaves no leeway for resolving issues that ordinarily might be fixed between heats, so we were very happy that the preparation by the Orange crew was pretty much perfect and that is reflected in our times today.

“We knew the car had loads of potential going into this weekend and that’s proven to be the case.

“It’s a new car and we’re still learning its nuances and limits, but today is a great confidence boost for the entire team.” 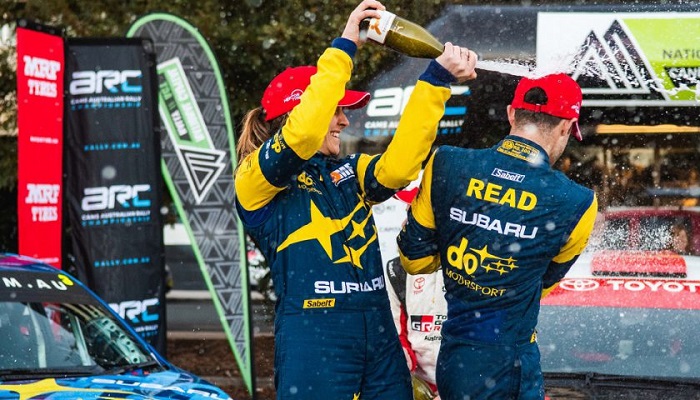