SOUTH AUSTRALIA’S most anticipated event for 2018, the annual Santos Tour Down Under, is shaping-up to be very special as the six-day international bicycle race celebrates its 20th anniversary.

The race is expected to be one of the hardest and fastest on record with some of the world’s top riders facing a mix of new and familiar stages.

As it has in the past, racing starts with the traditional Sunday night People’s Choice curtain raiser on January 14, a non-points street race giving riders a chance to test themselves and each other ahead of the main game.

The six-stage Tour Down Under (TDU) starts in Port Adelaide on Tuesday, January 16, heading for Lyndoch and taking-in the scenic yet tough terrain in Adelaide’s famous hills.

Lyndoch, Unley, Stirling, Glenelg, Victor Harbour, Norwood, Uraidla, McLaren Vale and the fearsome Willunga Hill will all be visited by the fast and colourful TDU peloton before finishing “speed week” with the traditional two-hour street race around Adelaide’s city heart.

Like every major tour, TDU is all about speed, strength and tactics and while there are a number of rider classifications, competitors will be chasing the three most important ones, each signified by a special jersey.

The outright leader in the General Classification wears the coveted ochre jersey, the Sprint Classification leader dons the red jersey and the Tour’s best hillclimber rides resplendent in the white-with-black-polka dots Subaru King of the Mountain (KOM) jersey.

This year’s KOM winner will be decided by points accrued on eight stage climbs over TDU’s six stages, one for each of the first four stages and two on each of the two final stages.

TDU is always big on public participation and the 20th anniversary event is not breaking the habits of a lifetime. Fans of all ages and fitness levels can pick between the BUPA Mini Tour for the kids, a Family Ride Day and the hugely popular, mass participation BUPA Challenge Tour over the same roads used by the pro riders.

And at the centre of the TDU Universe? The Tour Down Under Village of course which really does have something for everyone from Subaru display cars to merchandise, food and event superscreens showing all the action.

The whole TDU party leaves no one in any doubt that Adelaide really is Australia’s cycling capital.

Last year some 850,000 keen spectators lined the TDU stages and this year the number is expected to swell to more than a million fans cheering-on the riders. They will have plenty to see as the world’s top teams and many of the best riders battle for supremacy in the first UCI tour of the year.

Porte’s BMC squad does have one of the strongest rider line-ups though with the Tasmanian joined by this year by four-times TDU Simon Gerrans and 2015 winner Rohan Dennis to help spearhead its Adelaide attack.

So wherever you watch this year’s TDU from – the comfort of your couch, the Village or a roadside vantage point on one of the stages – one thing is certain: it will be fast, colourful and ultra-competitive.

TOUR DOWN UNDER TV

Watch the Tour Down Under stages free-to-air on Nine and 9Gem with nightly highlights on GEM. Check local TV guides for full details.

All stages have live streaming. Go to: wwos.com.au 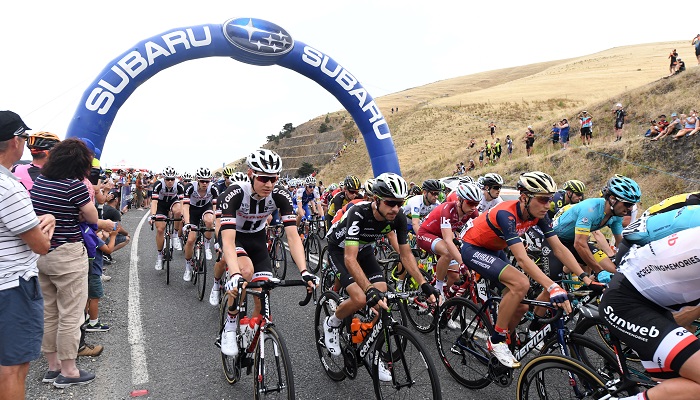