Subaru do Motorsport team is seeking more podium action in Canberra this weekend when the halfway point of the 2018 CAMS Australian Rally Championship will help decide who is best placed for the balance of the season.

Currently fourth in the championship after a hard-fought third place in last month’s Western Australia round, Molly Taylor and co-driver Malcolm Read are keen to use two very different legs to their advantage in the Netier National Capital Rally (June 1-3).

The turbocharged Production Rally Car (PRC) class All-Wheel Drive WRX STI, prepared by Les Walkden Rallying (LWR), will be on the international stage, with the Canberra event also forming a round of the Asia Pacific Rally Championship.

Saturday’s action is focused around the Kowen Forest area east of the city, where some rough red dirt roads - and some of the best spectator points in the Championship - add to the atmosphere and the expectation among competitors.

Sunday sees the rally head west of Canberra to the narrow, technical stages off Brindabella and Paddys River Roads, where tyre-wear across the six stages can be challenging.

Organisers say the return of some classic rally stages that haven’t been used in many years will add to the weekend excitement.

Molly said: “After getting on the podium in WA, we’re keen to repeat that ASAP and it’d be great to pass the half-way point of the season in the top three.

“With current leader Eli Evans again opting for the lightweight Skoda R5 for the second rally in a row, clearly it’s going to be a real tussle for points, so we’ll be going all-out to haul in some of his current buffer.

“In some ways, the legs in Canberra are like two separate events, so focus and planning are key components as we head into the weekend.”

In between events, Molly spoke at the recent NSW Parks and Leisure Conference, bringing the audience up to speed on Dare To Be Different, a new initiative that drives female talent in all areas of the sport.

Sunday’s Leg 2 is across six longer stages, over a total of 119.08 kilometres.

The rally gets underway on Friday afternoon with a ceremonial start from 4pm, at Garema Place, in the city.

The rally concludes with podium celebrations at the Service Park, at Pialligo Estate – close to Canberra Airport - from 4pm on Sunday. 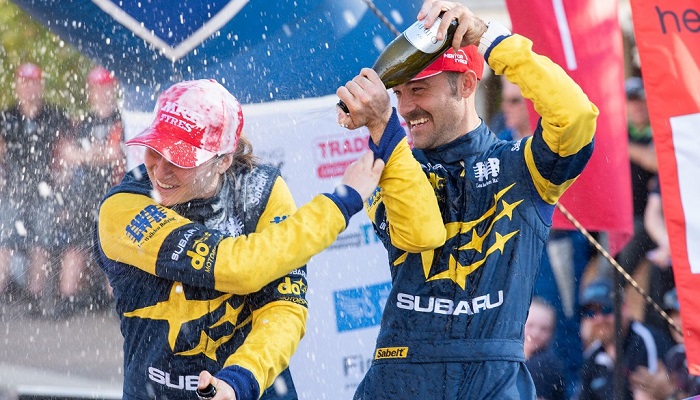