Subaru do Motorsport is aiming to repeat its winning form in Western Australia, when it starts round two of the 2018 CAMS Australian Rally Championship, the Make Smoking History Forest Rally, in Busselton, on Friday evening (April 27).

Molly Taylor took the honours in WA last year and along with new co-driver Malcolm Read is keen to build on her current fifth place in the championship.

The unique ball bearing-like surface on some of the stages outside of Nannup – south-east of Busselton – has traditionally highlighted the All-Wheel Drive ability and durability of the Production Rally Car (PRC) class turbocharged Subaru WRX STI.

The prevalence of lightweight AP4-class cars in 2018 has only inspired Taylor and Read – in the Les Walkden Rallying-prepared WRX STI – to take on the increased challenge.

Some bad luck in 2018’s Round One, Eureka Rally, Victoria, with a slow puncture on Heat One and a collision with a kangaroo on Heat Two, masked some very competitive driving by Taylor and Read, and the pair is keen to prove their strength in WA.

Molly said: “This rally can be fairly brutal on cars, so the intrinsic strength of the WRX STI is an advantage that, as we proved last year, can work in our favour.

“We aim to show that the set-backs in Victoria were a one-off and what better way to prove it than in an event where we won last year!

“As a new pairing, Malcolm and I already feel like we’ve established a good rapport in the car, so we’ve got the confidence and trust to maximise that in WA.”

Ahead of Subaru do Motorsport in the championship is current leader Harry Bates in the Toyota Yaris; Steve Glenney in the ex-LWR Subaru WRX STI; Eli Evans in the Mini Cooper and Lewis Bates in the Toyota Corolla – but Taylor and Read intend to claw their way back into podium contention next weekend.

Meanwhile, Molly’s diary has been largely full since round one - including receiving a Gold Harold Sports Award for her role in drawing a young and enthusiastic audience to motorsport, and passionately engaging them, on event and during school visits, to pursue their dreams and get involved in sports.

She also attended the Formula 1 Grand Prix in Melbourne, where she participated in the launch of the Dare to be Different campaign, which promotes female talent in all areas of motorsport.

A leisurely 18 kilometre run up Mount Kosciuszko and back highlighted Molly’s fitness – and she was also on hand in Tasmania to support Les Walkden when he competed in his WRX STI track car at Symmons Plains, outside Launceston.

Heat One action ends on Saturday afternoon after a further eight stages outside of Nannup, with a combined heat distance of 100.24 competitive kilometres.

Heat Two starts on Saturday evening with a single longer run around Barnard Park, then eight stages out of Nannup on Sunday, totalling 109.92 km for the heat. 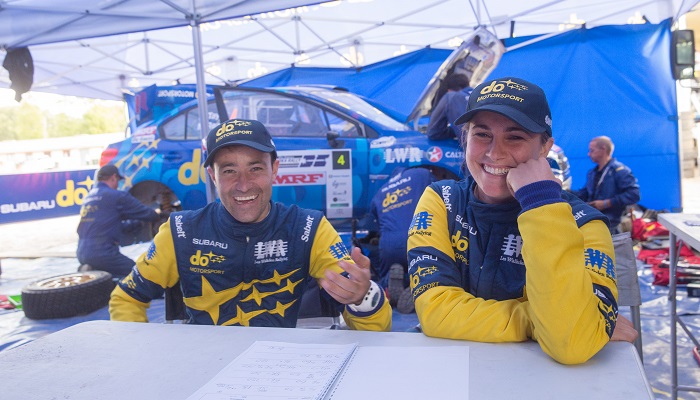