Sizzling Climax to 20th Tour Down Under 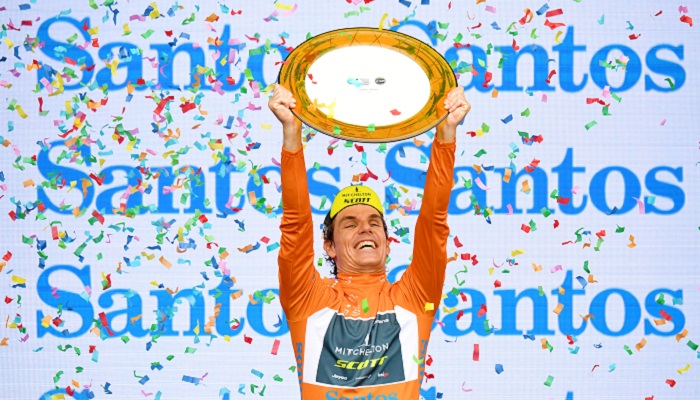 Tour Down Under 2018 was always going to be about Stage Five and the infamous Willunga Hill.

The hill was once again the ‘make or break’, the test that would rocket BMC rider and defending TDU champion Richie Porte his second win or give triple world champion Peter Sagan (Bora Hansgrohe) his first.

Except neither of those scenarios played out, even though Porte won the stage convincingly and Sagan bonked within a few kilometres of the finish line.

But Porte’s finishing gap to South African Daryl Impey (Mitchelton Scott) was too small, the South African taking the ochre leader’s jersey on a points countback.

Sagan rode into ochre on Thursday’s fourth stage, blitzing the field on a 45-degree day, at the same time becoming the first reigning world road champion to claim stage honours in the event.

The Slovakian had kicked race leader Zak Dempster (UniSA) to the kerb before getting into a dogfight with Porte on the way to the Uraidla finish, finally making his move on the downhill run to the line for his first stage win.

Stage Five, the ‘Queen Stage’, has always been the most popular with spectators and riders alike and this year was no exception.

A seven-strong breakaway led by Dlamini and UniSA riders Zak Dempster and Scott Bowden formed from the start, holding a steady gap over the pack until being caught just before Willunga Hill’s first Subaru King of the Mountain.

Dlamini and De Gendt stayed out, the Belgian rider holding out Dlamini to claim maximum KOM points in a slightly confused contest in which neither man knew the location of the line. Nevertheless, the young South African hung onto his polka dot jersey.

The second Willunga Hill ascent was classic Porte. After dropping back into the peloton for a rest the Tasmanian kicked, steaming to the head of the pack and taking Jay McCarthy (Bora Hansgrohe) with him.

Porte kicked a second time with 1500 metres to go. McCarthy lost momentum and, like Sagan who had succumbed earlier, simply drifted back.

Impey stormed into second place, the time gap enough to give him the lead on countback with Tom-Jelte Slagter third.

Dlamini finished the day with 48 Subaru KOM points, 10 ahead of Porte. Sagan, on 51 points, was nine clear of Ewan in the Sprint category. 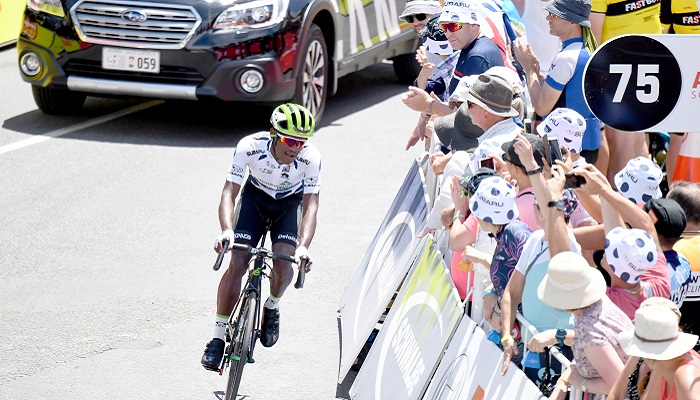 A 12-man breakaway formed within metres of the start but soon diminished, leaving Logan Owen (Education First Drapac) and Ben O’Connor (Dimension Data) to share both the Subaru King of the Mountain and Sprint points between them.

As the laps wound down and the break was absorbed the peloton formed-up to play cat-and-mouse.

Bahrain Merida moved right, Mitchelton Scott moved left and Education First Drapac rolled into the middle before Sunweb came forward, all of it making for a jostling, slipstreaming pack to take the last lap bell.

Cameron Meyer (Mitchelton Scott) took the lead but was soon replaced by Quickstep’s Elia Viviani. Ewan burst forward, only to be overshadowed by Greipel, the big German throwing everything into the last few metres to take the stage from Ewan by a mere 250mm with Sagan third.

For Impey it was a day not to be forgotten as he became the first South African to wear the winner's ochre in the TDU.

Speaking after the race, Impey admitted he had no expectation of a win coming into the event.

“Sometimes the stars line up and things go according to plan," he said.

"I worked real hard in the off-season so happy to get this win.”I'm stoked to get to the line, and obviously, with this team, I knew it was under control."