Roo Blues for Subaru do

A sixth place finish on Heat 2 of The Courier Eureka Rally in Ballarat, Victoria, today secured valuable points for Subaru do Motorsport team in the CAMS Australian Rally Championship 2018, despite a collision with a kangaroo denting progress.

Taylor and Read placed first on SS9, giving the new pairing their inaugural stage win together.

Taking the advantage into SS10, they looked well-positioned for a strong morning showing until an on-stage collision with a kangaroo literally dented their chances, though they still managed to place fifth on stage.

Some makeshift roadside repairs between stages kept the pair in contention, after the drive-belt dislodged in the collision and put the power steering out of action.

They then limped back to morning service for some urgent front-end attention from the LWR tech crew.

Ranking fifth overall going into the afternoon’s final four stages, the landscape changed once more with SS13 cancelled and allocated times awarded, reportedly after an on-stage incident with a competitor on the first pass through the stage this morning.

That left just three opportunities for fight-back in the wounded ‘Rex - and a sixth place on SS14 proved the Subaru spirit.

It was followed by two fourth places, including SS15, the repeat of the long Ross Creek run, promoting Taylor and Read to overall fifth. However, the pair ended just outside the top five despite a strong run on the weekend’s final stage, SS16 Golden Plains II.

So concluded a tough weekend, with Taylor and Read left to consider what might have been, but for an errant kangaroo today and a slow puncture yesterday – those issues aside, the pace and capability of the new-look Subaru do Motorsport team presents an intriguing prospect for April’s round two.

Molly Taylor said: “We’ve had our fair share of challenges over the weekend and Malcolm’s earned his keep on debut.

“I felt like I had a bit of unfinished business and just when we were making waves, we hit the kangaroo on the second stage. It was a super-narrow road on a really fast section and neither the kangaroo nor the car came off too well.

“We were lucky that it didn’t damage the radiator, which would have been game over, though we had the issue with the power steering belt, but managed to make a few running repairs and made it back by the skin of our teeth. It was a work-out, that’s for sure. Lucky I’ve been enjoying going to the gym so much!”

There was good news for the team last night: a timing update after competition ended promoted Subaru do’s Heat One finish from sixth to fifth overall, after times were finally allocated for the disrupted SS3, after a member of the public drove onto the “live” stage.

Next month, Subaru do Motorsport heads across country to Western Australia, for round two of the championship, the Make Smoking History Forest Rally, on the challenging ball bearing-like surfaces out of Nannup.

* Subject to final confirmation by CAMS 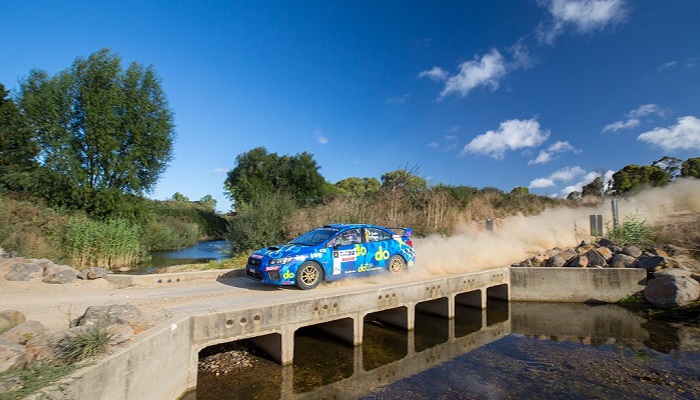